If you didn’t take a picture, did you really go to the gym? Sharing posts on social media is a great way to stay accountable, show off your hard work and to (more importantly) show off your new activewear.

Interested in seeing which fitness brand people have shared most on social media platform TikTok via hashtags, GolfSupport.com did some research and can now reveal all.

What is the most hashtagged brand on TikTok?

Topping the list is Nike, with a sizable 9.3 billion TikTok posts using the hashtag. The brand is famous in the fitness world and has collaborated with the likes of Kanye West, Lil Nas X and most notably former professional Basketball player Michael Jordan. 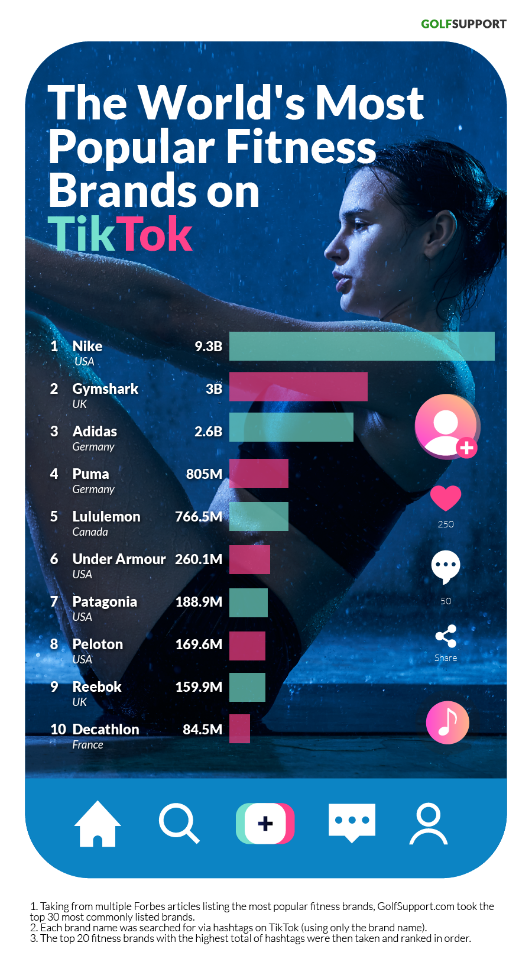 Following behind in second is Gymshark with 3 billion posts currently on TikTok. One of the youngest brands in GolfSupport’s top 20, founded in 2012, Gymshark has very quickly become a household name.

In third with a whopping 2.6 billion hashtags is Adidas. The German brand has been around since the 40s along with Puma which is the fourth most hashtagged with 805 million posts.

Lululemon, with a current total of 766.5 million posts, has become beloved by women for its leggings, perfect for low impact fitness such as yoga.

Completing the top 10 most popular TikTok fitness brands are:

On the other end and just making GolfSupport.com’s top 20 is women’s activewear brand Girlfriend Collective with 2.4 million posts.

Quins.us may host content that is aggregated or user contributed.

About Quins.us
Back to Top
Close Create

Your password reset link appears to be invalid or expired.

To use social login you have to agree with the storage and handling of your data by this website.